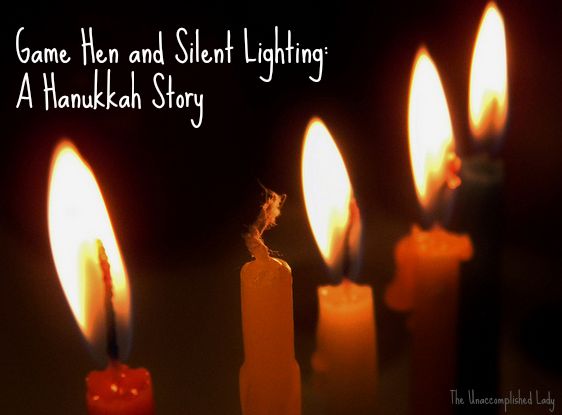 Let me start off by saying that I’m not Jewish. Not even Jew-ish. There’s not a drop of Jew in me.

But my mother installed a love of Jewish culture in me, probably because she had converted from being a Mormon to marry my then-Christian father (who had converted from Catholicism, because why not?). Mom had embraced the new faith, but I suspect there was a deep ache for binding traditions that hadn’t been satisfied when she converted to a church where pastors rode motorcycles and led choruses of “Our God Is An Awesome God.”

This explains why my mother threw inordinately large parties for my brothers and my birthdays, Valentine’s Day, and decorated the house extensively for Halloween. Every Christmas, we bought a tree, went to church, watched It’s A Wonderful Life and ate pancakes. Holidays were sacred. Traditions were sacred, just like the VHS copy of Fiddler on the Roof Mom watched with me at the age of 12.

I loved celebrating holidays, especially when new ones were added to the calendar when a Jewish family moved next door to us. They gladly shared their traditions with us, and we all soaked it up. We even went to temple, even if it was just as guitar-strumming as our modernist Christian church. Holidays were sacred. Traditions were sacred.

But as we all grew older, the sacred nature of each of these began to feel like a weapon Mom would use against us. Her guilting us back to our hometown became just as much of an annual tradition, especially after Dad passed away. On more than one occasion I dug in my heels, saying I’d be spending Easter with a Presbyterian family or Thanksgiving with another set of Mormons. This would usually be answered with a cloying “But it’s your family.”

So I stopped coming home all together. But I still wanted to mark the calendar. Holidays were sacred. Traditions were sacred.

Three years after the first time I skipped going home for holidays, I asked my Jewish boyfriend what we were doing for Hanukkah. “Nothing, I guess.” He replied.

I blinked. “What do you mean, nothing?”

“What are you talking about?”

“We just don’t really observe it.”

“But you identify as Jewish.”

Bless him, he didn’t challenge me when I said that. I was an ex-Christian by this point, so he was already accustomed to my struggle to celebrate holidays that would have ordinarily involved church (think giant Easter baskets). We were already the weirdest interfaith couple we knew. The ex-Christian teaching the agnostic Jew about his own holiday wasn’t too far of a stretch.

It was too late to buy Hanukkah presents for each other, so I went hunting for a menorah and candles. The only non-hokey one left was pristine silver and ancient-looking, so I figured it would do. My boyfriend’s mother (decidedly non-Jewish, but the closest relative to spend holidays with) cooked kosher Cornish game hen for Christmas dinner and let us light menorah candles on her table. No blessings said, because I wasn’t a Jew and no one else knew them. Respect had to be paid somewhere.

There was a surprising lack of resistance from my Jewish friends. A non-religious couple we knew even gave me a Yiddish phrase mug for Christmas. A part of me kept waiting for someone to challenge me, to say that this wasn’t even my holiday. But it never happened.

The candles were too drippy, and we forgot to light the candles two nights. But celebrating Hanukkah led to us eventually watching Fiddler on the Roof together. It led to me re-watching The Nativity Movie and taking note of the traditions surrounding rural Jewish life around that time. It led to my boyfriend being more open to hearing about Birthright Israel, a teaching program that I knew all about but of course could never participate in.

I don’t long to be Jewish, despite my efforts to preserve someone else’s heritage over a holiday season. I don’t seek to appropriate an entire culture and the religion paired beside it. If I were ever to convert to Judaism, it would be out of a total commitment to the faith. I wouldn’t go halfway. There’d be no viewing of The Nativity Story on that first holiday season.

Maybe I’m just more like my mother than I thought: Seeking out meaning and ritual where I myself have erased it. Mothers have typically been the gatekeepers of tradition in Mormon families. When the torch falls, we look for a new light. Even if we can’t say the blessing when re-lighting it.